Humble and Kind – Nursing in Hospice and Palliative Care 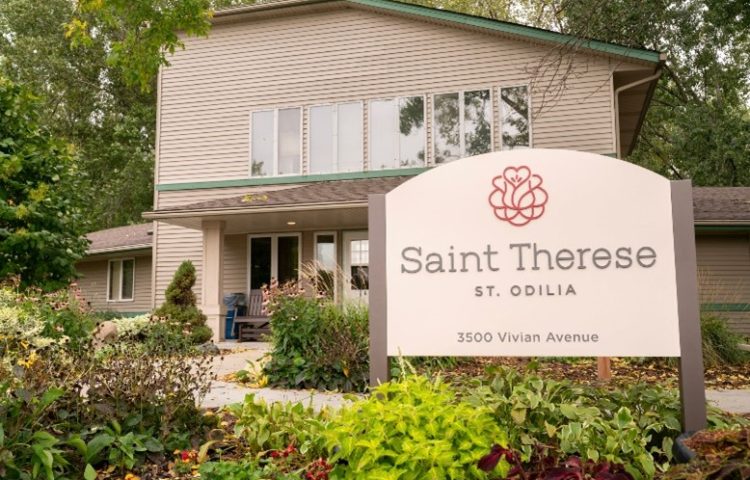 There may be no more intimate act than caring for people in a hospice and palliative care environment. It isn’t easy, but if you spend any time with folks that work in this area, you’ll learn they wouldn’t want to be anywhere else.

Case in point – the two Saint Therese nurses that head up Saint Therese at St. Odilia, a small eight-person hospice and palliative care home on the grounds of St. Odilia Catholic Church in Shoreview.

During this month’s observance of National Hospice and Palliative Care Month, we’re sharing the stories of Nolay Freeman, executive director at Saint Therese at St. Odilia and Sue Eichten, director of nursing. These two women traveled different paths to where they are today, but both know it’s where they were meant to be.

Nolay Freeman grew up in Liberia, in West Africa, and said she realized at a young age (around eight), that she wanted to be a nurse. She saw many people die of dehydration during their country’s civil war and she felt there should be a way to save them.

She moved to the U.S. and trained to become a nurse in Detroit, and eventually the University of Minnesota, where she graduated with a Bachelor’s in Nursing. During her clinical rotation in a long term care setting, her preceptor watched her interacting with patients and told her “this is your call,” referring to hospice and palliative care.

“I realized she was right,” said Nolay. “I am so happy I took that path. I am doing what I love doing. It’s about taking the time to know the patient, know the family and hear their life story. They are always so happy that I am interested.”

She joined Saint Therese in January 2011 as an overnight nurse and then moved to an assistant nurse manager role before assuming her current position as the executive director, overseeing about 27 employees and all aspects of the home.

She honors the Bible’s message of servant leadership, “Whoever would be first among you must be servant of all.[1]“

“Hospice humbles you,” Nolay said. “It makes you think about your own mortality. Usually we’re living in the moment, but in hospice the pace is different. You listen, hear their stories and help them transition. You meet them and their families, in a vulnerable state.”

Sue Eichten, born in Roseville, didn’t start her journey into hospice and palliative care until she was 47 years old. She spent most of her career doing administrative work, but when her mom went into hospice in 2010, it lit a spark.

“I was moved by the care the hospice workers provided me and my family,” said Sue. She was intrigued about what she could do. “I saw people all alone at the end, and it broke my heart.”

A member of St. Odilia Catholic Church, Sue began volunteering at Saint Therese at St. Odilia in 2012, about a year after it opened.

“I didn’t realize I had an affinity for the elderly or end of life,” said Sue. “But I learned from my own experience when my mom was in hospice and what the caregivers did for my mom and the family. I was moved by the care they provided and wanted to do the same for others.”

Sue got her CNA (certified nursing assistant) license and then began working part-time at Saint Therese because it was so rewarding and fulfilling. She credits Nolay for being persistent in talking her into going to nursing school. She kept saying, “You are a hospice nurse.”

Indeed, she is. Sue graduated with a nursing degree from Century College in 2016.

“I like our elderly,” she continued. “They are so kind and have so much knowledge and experience and life to them. I think they are amazing and feel glad I can make a difference.”

“We need more people in hospice,” she added. We all go through it, and we want to help families go through this experience in the most dignified and compassionate way.”

Sue said helping a loved one transition to death restores her faith, and she sees the beauty in it. “I feel there are those that bring life into this world and those that help ease them out.”

This is Saint Therese at St. Odilia’s 11th year of caring for residents.

Hospice is not a place but high-quality care that enables patients and families to focus on living as fully as possible despite a life-limiting illness. Palliative care brings this holistic model of care to people earlier in the course of a serious illness.

Every year, nearly 1.4 million people living with a life-limiting illness receive care from hospices in this country, according to the National Hospice and Palliative Care Organization.