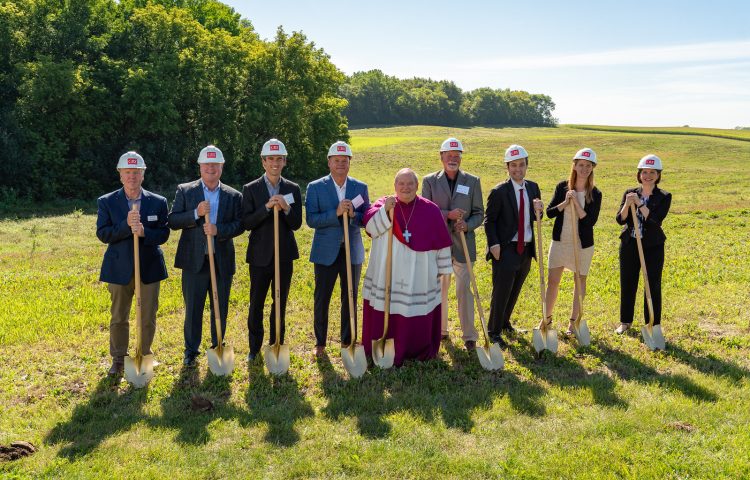 “This building will not be ordinary. It will be extraordinary because of the extraordinary love and purposeful planning that has gone into it.” Those sentiments were expressed by Craig Abbott, president and CEO of Saint Therese, at this month’s groundbreaking ceremony for Saint Therese of Corcoran.

Under clear blue skies and with the green backdrop where the future senior community will stand, Abbott and more than 50 attendees took part in a traditional sod-turning ceremony after receiving a blessing from honored guest, the Most Reverend Bernard A. Hebda, archbishop of St. Paul and Minneapolis.

His blessing included the following: “Whenever we look to the interests of our neighbor or the community and serve them, we are, in a sense, God’s own co-workers. Let us pray for his help through this celebration, my brothers and sisters, that God will bring this construction to successful completion and that his protection will keep those who work on it safe from injury.”

Patrick Taffe, chair of the Saint Therese Board, said this new community had been a dream of theirs for many years, not only because of its pastoral setting so near to the metro area, and the city’s plans for a vibrant new kind of community…but also Father Gordon Mycue, one of the co-founders of Saint Therese in the early 1960’s, was the pastor for 23 years at St. Thomas the Apostle Church in Corcoran, which is less than a half mile away from the site.

“It feels like we’ve come home, and we can imagine Father Mycue smiling down on us, along with the other founders, Jerry Choromanski, Elizabeth Hidding, and Sister Marcelline Jung,”said Taffe.

In addition to Abbott, Archbishop Hebda and Taffe, others taking part in the ceremony were Calvin Shelangoski, Saint Therese CFO; Ward Isaacson and Christine Soma with Pope Design Group (architects for the community); Stuart Bestul with CBS Construction services (general contractor); and Mayor Tom McKee and City Administrator Jessica Biese with the city of Corcoran.

Other guests included future residents of the senior community, local businesses and Saint Therese staff. They enjoyed a reception afterwards at St. Thomas the Apostle Church.

Abbott said construction will begin in the coming months with a targeted opening of April 2024. The initial phase will include a variety of multi-story buildings with 153 apartments for independent, assisted living and memory care. Features of the community include a variety of dining experiences, a chapel, wellness center with a pool, library, golf simulator, theatre and an outdoor amphitheater and woodworking shop.