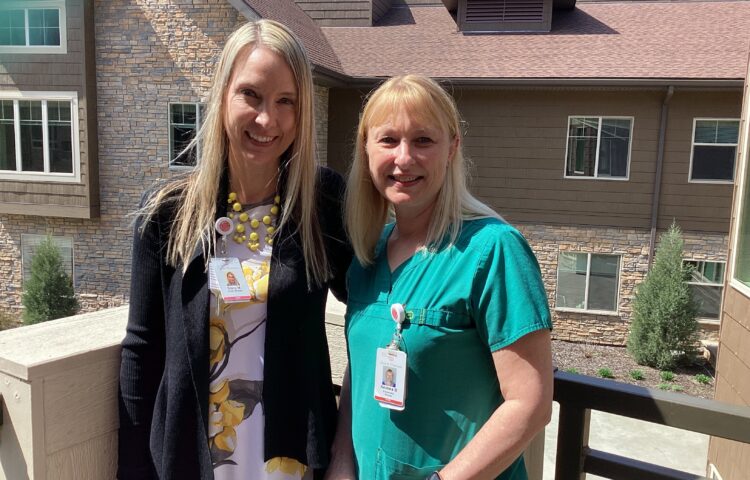 Healthcare workers were rightfully applauded for their selfless and heroic work during the pandemic. Nurses, a critical part of any team – and absolutely vital for a senior living community such as Saint Therese – were especially commended.

And we’ll do the same this month as we celebrate National Nurses Month, a time to promote, support and honor the varying role of nurses and the positive impacts they make every day.

For the next few weeks, we’ll introduce you to some of the nurses at our Saint Therese locations.

At Saint Therese of Woodbury, Stacy Meyer, RN, and Andrea Brown, LPN, (left to right respectively), along with 11 home health aides, provide care for the more than 80 residents in independent living, assisted living and memory care.

They both have been nurses for more than 25 years and say what keeps them in senior living is the residents and the ties they’ve made with them. They also credit the cohesive team they’ve created.

Stacy, who has worked in many healthcare settings over her career, said what makes this environment so rewarding is that she sees results the same day. “I can go home and know that I actually did something to make one of my residents better. That is powerful.”

She was attracted to nursing and caring for the elderly population at a young age. She was 16 when she volunteered in a memory care and helped play bingo with the residents. She said she loved the enthusiasm the residents had, even by just winning a banana.

“At that moment I knew I wanted to work with the elderly.” She said she finds them very wise and learns a lot from them. And, with a degree in Sociology, Stacy is fascinated by their stories, and is often able to engage with residents in memory care and get them to “light up.”

“I feel like I’m doing God’s work. I don’t know what I’d do if not this. And, as important as the care I’m providing, I’m the gateway between the families and our residents.”

Andrea wasn’t called to nursing at a young age like Stacy, but she said she’s always been a caretaker.

“I’m a mother figure to everyone, so nursing was a natural way for me to fulfill that inclination,” said Andrea.

She said she’s stayed at Saint Therese for so long because of the bonds she’s created with residents, families and staff. “We get to know everyone, we’re like a family and that means something.”

Nurses mean a lot to Jill Acosta, executive director and campus administrator at Saint Therese of Woodbury, who has nothing but praise for nurses.

“We wouldn’t exist without nurses,” she said. “We owe them everything, they make a world a better place for all that they do.”

She’s not alone. In 2021, for an impressive 20th consecutive year, nursing was rated as the most trusted profession, according to a Gallup poll.