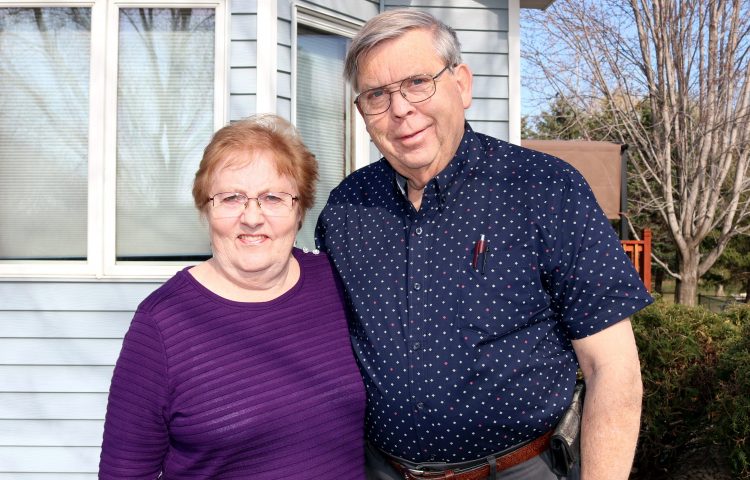 Transitional care units like the one at Saint Therese at Oxbow Lake get cases of all kinds – people rehabbing from falls, fractures, joint replacements, UTIs, and strokes – but they had never had a patient with such a severe form of a rare disorder as they had earlier this year.

One morning this March, Phyllis Bickford, age 79, of Anoka, woke up to find that she couldn’t walk. She said her legs had become “like Jell-O.” Rushed by ambulance to Mercy Hospital in Coon Rapids, she became so weak that she couldn’t even hold her head up.

Doctors at first thought she had a bladder infection and low potassium, but eventually one physician researched the case, called in a neurologist to consult and diagnosed her with Guillain-Barré syndrome (pronounced Ghee-YAN Bah-RAY). This is a rare disorder in which your body’s immune system attacks your nerves. Weakness and tingling in your hands and feet are usually the first symptoms.

Phyllis stayed at Mercy for one week and then was told she was going to need some serious therapy and the hospital social workers weren’t sure she was going to recover. But they worked to find a transitional care unit (TCU) that could care for this unique case. Saint Therese at Oxbow Lake was one of the few communities that had a rehab bed, and most importantly, felt they had the therapists to help Phyllis.

“We’ve had previous cases of Guillain-Barré, but this was the most severe we’ve seen,” said Kali Wachter, manager of rehab and wellness at Oxbow Lake, for Ascend Rehab (a unit of Saint Therese). “When Phyllis arrived at the TCU she was dependent upon caregivers for all her daily tasks and her mobility.”

From the get-go Phyllis was steadfast in her determination to walk out of the TCU. For the next 120 days, she worked with therapists (occupational and physical) twice a day to slowly get back functioning. Therapists used a variety of treatment approaches including electrical stimulation, strength training, neurological interventions and the use of a specialized gait training system.

“I loved the girls [therapists], but I hated to see them come,” said Phyllis. “They really work your butt off.”

At her side, every single day, all day, was her husband Don. Phyllis’ daughter visited in the evenings after work.

“It’s hard to put into words the amount of progress she made and her determination,” said Wachter. “Her improvement was so profound, and her therapists will never forget her. She put in the work.” In addition to the therapists, Wachter commended the entire interdisciplinary team for their help with Phyllis’ recovery, including social workers, nursing and dietary, to name a few.

Phyllis admitted she didn’t really know how bad her condition was. “Thank goodness, no one told me I was a challenge. I worked hard because my husband worked so hard throughout his life. I did it for me and I did it for him. I wasn’t going to waste it by acting like a baby and not doing what could help me.”

She said she made some really good friends among the staff at Oxbow Lake. “There are some wonderful people there. They really cared. They stuck to their guns and told me I could do it. They refused to give up. They’re not just doing their job, they’re getting involved.”

On July 8, Phyllis fulfilled the promise she made to herself and others and walked out of the TCU. She’s now at home, continuing to work on her recovery. She said she’s walking pretty good with a walker but can also do a bit of walking without it.

Her next goal is to walk down the aisle with her grandson for her granddaughter’s wedding in October.

Judging from the tenacity and grit she showed earlier this year, we have no doubt that it’s another promise she will keep.